The Plátano Canario is a special type of banana which grows on the Canary Islands. There are three variations to it. But in general all three are a bit shorter than their South American relatives, and a lot sweeter. The pride of every Canarian.

Correctly spelled, there is a “tilde” on the first a: plátano – therefore putting emphasis on the first syllable.

Why is the Plátano Canario sweeter?

Once you have gotten used to the taste of the Platano Canario, it is almost a disappointment to start eating the ones imported from South America. We were reminiscing why the Canarian variation tasted so much better, and we came up with following reasons: 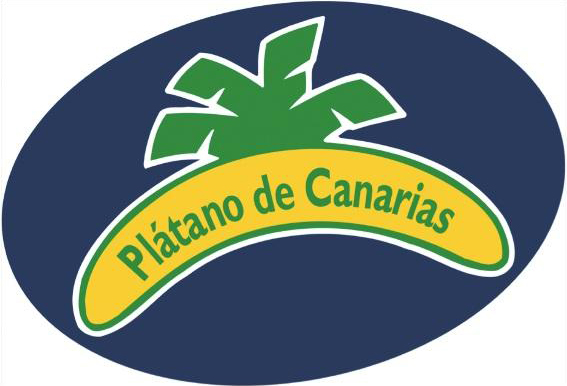 Apparently 90% of the platano Canario is being exported to Europe and mainland Spain. Look out for them. You will find them with the sticker Plátano de Canarias in your local supermarket.

They may be more expensive than their South American counterpart. But try them anyway. You might get surprised by their delicious flavour.

Why Is It called Platano Canario?

Why is it called a plátano in Spain, when in the rest of the world it is called a banana? This is a mighty good question. Well, some say it is because the Canarian variety is called plátano and the South American type is called banana in Spanish. I have heard the Canarians say banano for the banana plant, and plátano to the fruit.

This very interesting Chilean article on the etymology of the word plátano, says that in Chile they call the banana plant banano.

What they call a plátano is a particular species of a sycamore tree. In Spain this particular sycamore tree is named plátano orientál. See its leaves and fruits on the picture on the right – nothing like a banana.

When the Chileans  talk of the fruit itself, they call the female, small, yellow and sweet one plátano, and the male, green and bigger one banana.

In English it is the other way around. We call the yellow one banana and the bigger green one plantain. The plantain we also know as the cooking bananas.

In mainland Spain, apparently, they call a plátano exclusively the bananas imported from the Canary Islands. All the other ones, they call banana like everyone else.

Where does it come from? 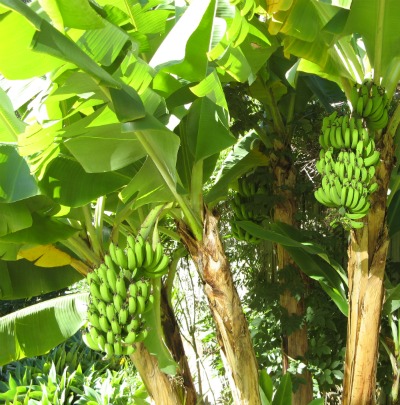 The fruit originates in South-East Asia. It spread over Madagascar to Africa. From there the Spaniards brought it to the Canary Islands, calling it plátano, referring to the wide leaves of the banana plant. To me the plant looks like a miniature palm tree.

As matter of fact, the banana is classed as a large herb. Since it can grow several meters high it is therefore the largest herb on the planet.

When the Spaniards began conquering the Americas they also took along the bananas for cultivation, which nowadays play an important agricultural role in many of the Central and South American countries.

The scientific name for the banana family is Musa, which was still used up to the 15th century in some middle and northern European languages, as the fruit was still unknown to the Europeans until then.

It is assumed that banana is a derivation from the word plátano. But the Arabic word banan actually means finger, and nowadays a small bunch of bananas is called in Spanish “mano de plátanos” – a hand of bananas. Another source believes the word banana to come from a west Afrikan language.

Fact is, in South-East Asia, where the banana comes from originally and where there is a big diversity of bananas, it is called something completely different. See more on Wikipedia.

Some believe the Koran to say that the forbidden fruit which Adam and Eve ate was not actually an apple but a banana. And that the leaves they covered themselves with were the leaves of a banana plant, since the leaves of an apple tree could hardly cover, what they needed to cover.

Well, at least we know now, why we call it Plátano Canario in Gran Canaria.

The Plátano Canario written by Judith
Hi, I am Judith, the founder, author, translator and coffee girl of the GRAN CANARIA REGIONAL Guide.